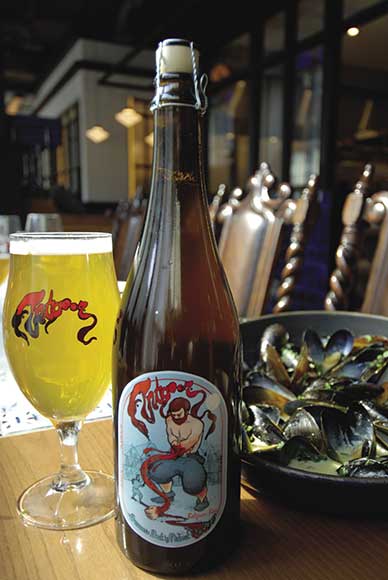 Cooked mussels can be eaten directly from the pot or pan or transferred to a wide-rimmed soup bowl. Keep covered until just prior to eating as they cool quickly.

Antigoon Beer
In 2010, Chef Wiedmaier approached the Belgian Brouwerij De Musketiers to brew a special beer for him. The result is Antigoon, a bright yellow beer that is slightly hazy in appearance with a nice bready nose, funk from the yeast, a sweet and malty balance, an earthy hop, and a hint of fennel to round out the flavor. Medium-bodied, Antigoon has a clean, dry finish with a bit of lingering bitterness from the hops.

A fitting tribute to Wiedmaier’s Belgian background, Antigoon comes from the legend around the origins of Antwerp’s name. According to folklore, a cruel giant called Druon Antigoon would hold up all the ships entering the harbor from the river Scheldt to demand a toll; those who refused lost their heads. One day, a brave soldier, Silvius Brabo, cut off Antigoon’s hand and tossed in it the river. This act of “throwing the hand” became “hand werpen”—
or Antwerp.

The label on Antigoon by Robert Wiedmaier features the giant with his bleeding limb. The beer has grown from cult-status popularity to overwhelming demand from both sides of the country.