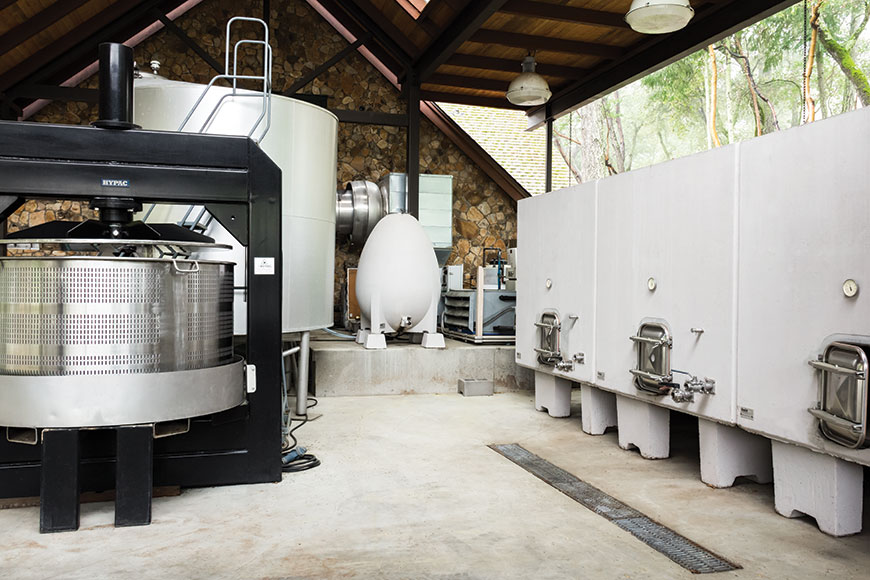 Alan Viader, Director of Operations at Viader Vineyards and Winery, on Concrete Tanks

In 2004, Viader Vineyards started using concrete tanks for fermentation and storage. “My mother made the initial decision,” explains Alan Viader. “She was attracted to the old-globe wine houses like Château Pétrus, which had concrete tanks. And since we also have a more traditional wine style, she thought it would be a nice fit.”

Using concrete tanks is nothing new. In fact, this age-old practice dates back to Roman times. It fell out of favor toward the end of the last century and was only recently rediscovered by winemakers. Today’s models include modern twists: stainless steel fittings, temperature controls and customized doors to make draining and cleaning easier. Plus they come in all shapes and sizes, some more surprising than others.

Viader gets its concrete tanks from Nomblot in France—one of the original companies to begin making them in the 1920s—and uses them to make red wines. Today, several U.S. companies custom-design their tanks using domestic concrete. For Viader, glycol plates and a stainless steel coil on the inside of the tanks help control the temperature. The winery has concrete cubes that are quite large and eggs that are fairly small. While he’s happy to tout the merits of concrete in general, Viader is clearly taken by the egg shape of his tanks.

Many feel the biggest benefit is that, similar to oak barrels, concrete allows the wine to oxygenate gradually, but without the oaky flavors of the wood barrel. “Concrete is porous. It keeps the yeast happy at the end of fermentation, and that in turn makes the wine less reductive in character,” says Viader.

Given the cubes are five-ton tanks, Viader can whole ferment wines in those. “Because the egg is so much smaller and has only a small eight-inch opening at the top and two-inch valve on the bottom, I tend to use it as a neutral vessel in which to finish fermentation, without skins. When I compare the two lots, 99 percent of the time I prefer the egg because of the rounder, richer mouthfeel. It tends to be less reductive and more expressive of fruit notes, and creates a beautiful, aromatic wine.”

Can shape really make that much of a difference? Viader thinks so. “I believe the egg shape has a huge impact, in a subtle way,” he explains, the way the wine settles on the bottom of the egg similar to the way it settles in the arch of a barrel. “You get a thin layer of sediment versus big chunks in a corner.” He points out that the natural shape promotes a cyclical flow or natural stirring effect during fermentation. “There is something very special about the egg shape. It’s so natural; the sphere is beautiful. It really lends itself to a roundness or freshness that comes out in the wine.”