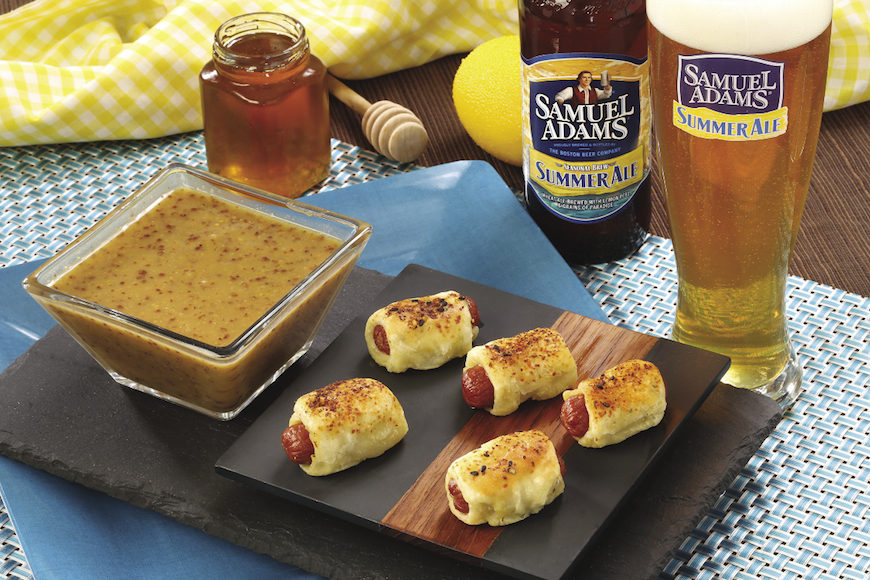 Pastry-rolled cocktail franks are undergoing a newfound wave of popularity and Samuel Adams has teamed up with Chef David Burke to create some unique recipes. “There’s nothing better than a tray of pigs-in-a-blanket at a party, except if you’re pairing them with a summer ale,” explains Chef David Burke, who takes the popular appetizer to new levels of whimsy with his variation on the classic.

“The flavorful combination of grains of paradise and lemon zest add layers of bright and spicy flavors in this savory dish,” explains Jennifer Glanville, Samuel Adams Boston brewery manager. The distinct flavors of miso— salty, sweet, savory, and earthy—are brought forward by the peppery character from the grains of paradise, while the bright lemon flavor balances the acidic, sweet flavor of the mirin and the honey.

Place the rolled pigs-in-a- blanket, seam-side down, on a parchment-lined sheet tray, and brush with egg wash.

*For the spicy “wild and crazy” kick, sprinkle togarashi over the egg-washed pastry.
Bake at 375°F for 15 minutes, or until golden brown.

In a bowl, whisk together the miso paste, mirin, Samuel Adams Summer Ale, honey, 3 tablespoons Dijon mustard, soy sauce, salt, and pepper. Place in a serving bowl and serve room temperature to warm as a dipping sauce for the pigs-in-a-blanket.