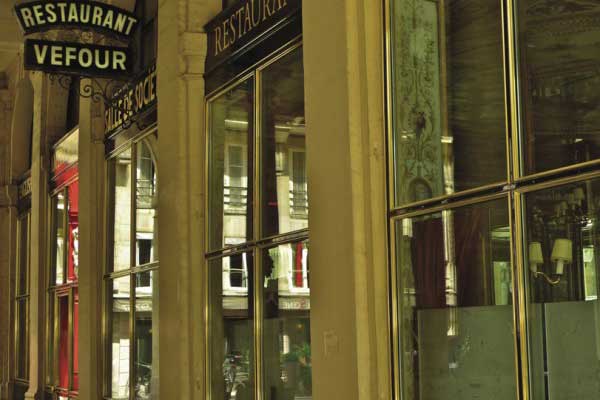 At Le Grand Véfour in Paris, it is around 5:30 p.m. and snowing. The dining room brings back old-world classic dining in the grand feeling of gastronomie, as if Brillat-Savarin could be sitting right next to you.

The music is the movement of the show in the dining room (or should I say the stage): the chatter of the diners, the pop of a Champagne cork, the squeakiness of a corkscrew, the removing of a cloche, and the captain’s“voila!”—that is music to me. The sommelier opens a bottle of 1982 Krug Rosé. While he pours the bubbles, the captain brings over the amusebouche: a warm buckwheat blini, golden brown, topped with crème frâiche and a heaping mound of Golden Ossetra caviar dusted with finely chopped chives and red onion. After all, this is my last meal. Another bottle of Champagne, Gosset Brut excellence, with a gratin of Belon oysters, Champagne glaçage, topped with a Parmesan crust. The Champagne has crisp, cold, tight bubbles to complement the flavor of the cheese and oyster brine of the North Sea.

FIRST COURSE: Whole roasted turbot on the bone, served with pomme fourchette. The fish is a perfectmedium rare with the essence of brown butter and thyme perfectly lathered by the poissonier at the last second, placed upon crushed potatoes and drizzled in Valderrama olive oil with just a dash of Maldon salt. The wine: a 2000 Chablis Grand Cru “Clos” Domaine François Raveneau.

SECOND COURSE: Roasted chestnut soup with venison sausage and sautéed girolle mushrooms in a quenelle celery root puree. The captain brings out the soup plate and his assistant follows with a tête de Lyon, ladling the soup around the garnish. Of course, the entremetier had just blended the soup at the last minute, so it’s aerated and smooth and infused with roasted foie gras and black truffle juice. Sitting next to me is my already decanted bottle of Romaneé-St. Vivant Domaine Leroy.

THIRD COURSE: My next course of gluttony is the purest, whitest, cleanest roasted sweetbreads, like clouds yet crisp and golden on the outside. This is nestled on top of baby spinach, sautéed in shallot butter and sauced with a veal jus infused with Ghent mustard from Belgium. The wine: Châteauneuf-du-Pape Domaine du Vieux Télégraphe.

FOURTH COURSE: Whole squab from Bresse that is roasted and stuffed with thyme and garlic, served with caramelized salsify and root vegetable puree, and sauced with a pigeon reduction of shallots, thyme, and truffle butter whipped in at the very end. At the last moment, a dash of fleur de sel. The wine: Bonnes- Mares Grand Cru Remoissenet Père et Fils. Cheese brings this last meal to a close. Two cow’s milk—Époisses de Bourgogne and Vacherin du Mont D’or—and one ewe cheese, like a Tomme Corse from Corsica (as this is my last meal, and I want to try something new). With this, I would have grilled baguettes drizzled in walnut honey and a beautiful bottle of Côtes de Rhône. And for the very end to a grand meal, a Grand Cognac and a Montecristo #5.

Written By
jana
More from jana
When I was working in Brussels for Chef Eddie Van Maele, he...
Read More