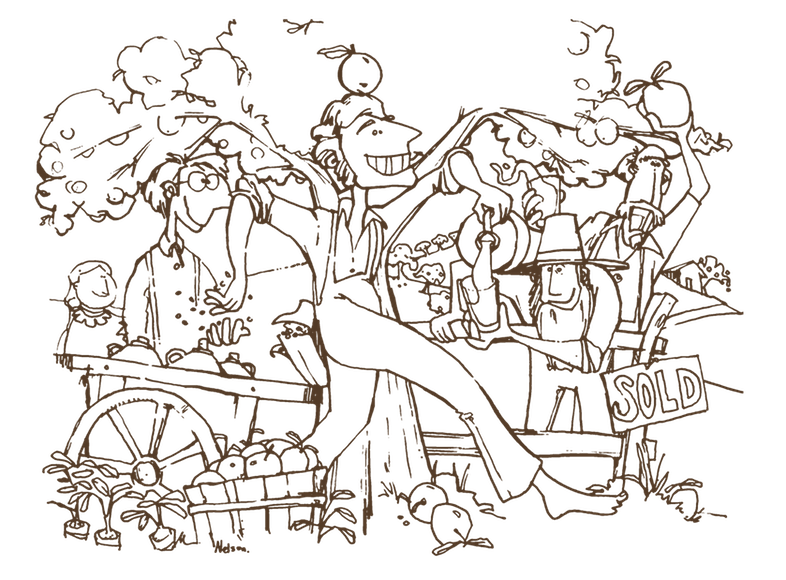 A long, long, long time ago in a land far from America, the first apple was eaten. Kazakhstan is what they call that place now.

That apple pleased its diners so, and they planted every seed from its core.

The apples grew and grew, and each one differed from the one before. No two apple trees, it seemed, would be the same, but still the people grew them, more and more and more.

Soon the apple tree grew far beyond its home. From Athens to Rome to Gaul and even to old Great Britain, this fruit would go. From old Britain it crossed the ocean to the world they called “new.”
In the land of America, the apple would find a home and begin a new journey. A favorite treat, the apples quickly spread among these newly settled folks, and far and wide the apple provided fruit and cider to one and all.

A John Chapman from Massachusetts colony decided his was an apple’s fate. There was work to be done along the way called the frontier. So off he set for the wild frontier with a big bag of apple seeds, stopping here and there, planting orchards far and fair. Along riverbanks, hillsides, prairie sites they grew; fencing them in, he would to save their little branches.
Soon those folks called pioneers followed, and old Johnny Chapman had apples to sell to these new homesteaders. Each new home would grow their own, apples for everyone, and oft Johnny would return to see his planted trees now ripe with the favored fruits (and to sing a song or two for all who’d listen), but then off again he’d roam, new seeds to plant, orchards to row, and apples to grow, all along the american frontier.

He became known as old Johnny appleseed, the few folks become many, homes became cities, and because of Johnny, the land of “new” is apple-filled. Newly famed delights with names we know and like: the Delicious, Baldwin, Macintosh, Nonesuch, Seek-No-Further, Honeycrisp, and more. thanks to old Johnny appleseed, upon these names we can feast.

As the apple tale does tell, though our world ranges far and wide, we, its people, are closer than we might appear. Remember man and land are much the same, whether near or far, for all can see every man enjoys the apple and its seeds.