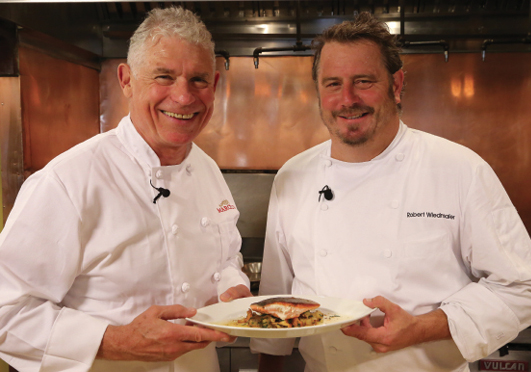 “I have known John for many years, and we enjoy hunting and fishing together. You can tell that John really appreciates good food. He likes going out and harvesting an animal, bringing it back, cooking it really well, and sharing it with friends. I have had the pleasure of being involved in four or five episodes of Riggo on the Range, which is always a lot of fun to film. John was always considered a rebel, and in many respects this phase of his life is another testament to being true to something he is passionate about.” — Chef Robert Wiedmaier

He might be best remembered for his 43-yard touchdown run in Super Bowl XVII, but today you can find John Riggins in his kitchen, preparing lunches for his kids or dinner for the whole family. That’s after he’s hunted or fished for the protein on the plate, often in the company of his friends, fellow former teammates and coaches. He films his culinary adventures and now Riggo on the Range can be viewed on Discovery Channel’s Destination America.

“My passion for cooking developed slowly over the years. I suppose I have always had a strong subconscious appreciation for what it takes to be a chef. Going to a place like Marcel’s, I quickly realize I will never be able to play on that level in the kitchen. But chefs like Robert are an inspiration. Besides, I love to eat great food. My mom was an excellent cook, and when I left home I was introduced to a whole world of food. My natural curiosity for food whets my appetite to cook.

After 40 years in football, I decided to do something else. I liked to hunt and I met someone who wanted to partner with me to produce a show about hunting. But then the idea evolved because my approach to the sport is more than just the kill: I am going shopping. I look forward to bringing something home to the table, much as it was done for that purpose 200 years ago. That is where the cooking element came in. I wanted the show to appeal to those who enjoy hunting but don’t necessarily know what to do with the animal after they kill it. I want to provide a basic understanding of the steps involved to create a meal that you will never, ever be able to get at any four-star restaurant, because eating wild game or fish straight out of the water is an experience unto itself. Riggo on the Range is about fostering that appreciation for the meal and respect for the animal that provided it. It’s a cooking show where my grocery store is the outdoor forest.

The social aspect of hunting, the company you keep, really dictates the kind of experience you can have. Some people like to hunt alone. I want to collect those priceless moments with friends when someone falls in a hole or water up to here and you all crack up! It takes me right back to the football field, that same camaraderie during a debriefing after the game, remembering all the laughs you had! Some of my favorite hunting trips to date have been with former teammates and coaches.

I connected with Robert through one of his uncles who fishes at the same place I do in King Salmon, in the Katmai National Park in Alaska. I started frequenting Marcel’s when I moved back to D.C., and we became friends. One day I decided to add a professional chef to the mix on my show, and so I asked Robert. He was happy to participate.

It’s great to be around professionals in the kitchen. You can learn so much by just watching and listening. I don’t consider myself a great cook, but I do have an instinct for flavor and texture, and anticipating that mouthfeel. I’m not very good at writing things down; I usually just throw it all together and learn along the way. I truly believe that to have a great meal is one of the joys of life.”

GO-TO DISH: Something on the grill. That is where I am the most comfortable.

KITCHEN GOAL: To time it right to make a béarnaise sauce with a steak.

BIGGEST ACCOMPLISHMENT IN FOOTBALL: Telling Joe Gibbs I wanted the ball in the ’83 Super Bowl playoffs.

FAVORITE FOOD DESTINATION: Italy. I have never had a bad meal there. It’s part of a culture we don’t have … yet.

INSPIRATION IN YOUR LIFE: My older brother, who was a great athlete. He set the bar high.

DREAM DINNER: A simple affair with my wife. I would prepare a striped bass, fillet it, skin on, on the grill, and then skewer 1-inch pieces with nothing more than olive oil, pepper, and a little lemon juice.